Some of you might have read my post called My Amiga 500: Back from the Shadows. If you haven’t, you can find it by clicking on this link. The article is basically about the fact that my Amiga 500 has lived in the shadows of my Amiga 1200 and not seen any use for a long time. I therefore got the idea to give this computer a nice make-over, which I believe it deserves.

This make-over has now officially started and in this post you’ll get to see the first “before and after” photos of the machine.

Before: My Amiga 500 before the start of the make-over. (photo by Old School Game Blog) 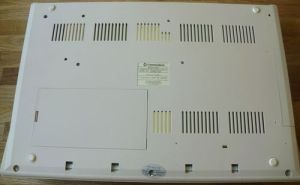 Before: Here’s another one.. (photo by Old School Game Blog)

The machine doesn’t look too bad on the photos. I’ve kept it clean and it hasn’t been exposed to much sunlight either. I’ve therefore managed to avoid the dreaded yellowing of the plastic.

Let’s open the lid and see what’s inside..

Before: The metal shielding has taken some hits and there was dust in some places. Removed the dust. See that floppy disk drive? It’s not working properly and has something that looks like rust-spots. (photo by Old School Game Blog)

I’m ready to remove the floppy disk drive and install the brand new one I ordered from Vesalia (thanks guys!). 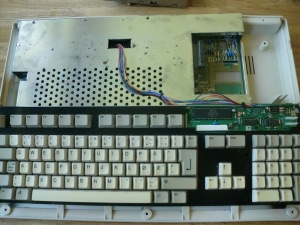 There.. the disk drive has been removed. (photo by Old School Game Blog)

For those of you who are interested, here’s a quick snapshot of the old drive. It doesn’t look nice at all. This one has loaded its last game of Badlands, that’s for sure.

Now I need to install the new drive. Here’s the result! 🙂

The disk drive is one of the most important things on the machine, as I can’t really do anything without it. I don’t have a hard drive for my Amiga 500 yet, so I’m stuck with floppies. Fortunately I’ve got a hard drive for Amiga 1200.

Now for a little surprise..

Remember that KCS PowerPC card I bought from Flip at AmiBay? Well, I popped that one in before the floppy disk drive.. 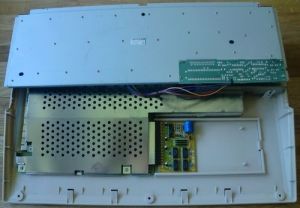 Before: The card that’s already installed is a 512KB memory expansion. The KCS PowerPC board does include more memory, so I’ll still be able to play games requiring 1MB of RAM. (photo by Old School Game Blog)

After: There.. the KCS is in place and ready to run old-school PC software. (photo by Old School Game Blog)

If the Amiga 500 could talk, I’m sure it would be satisfied with this make-over. 😉 Not only has it received a brand new drive, but also a nice retro emulation card.

Want to see the machine after this little make-over? Here it is!

After: My Amiga 500 with the KCS diskette (photo by Old School Game Blog)

The make-over is not complete though, as I’ve got a Kickstart ROM switch waiting to be installed. 🙂 I’m also on the prowl for some cool add-ons for the machine. Part three will be coming up in he near future! Then we’ll also get to see it in action on my TV!