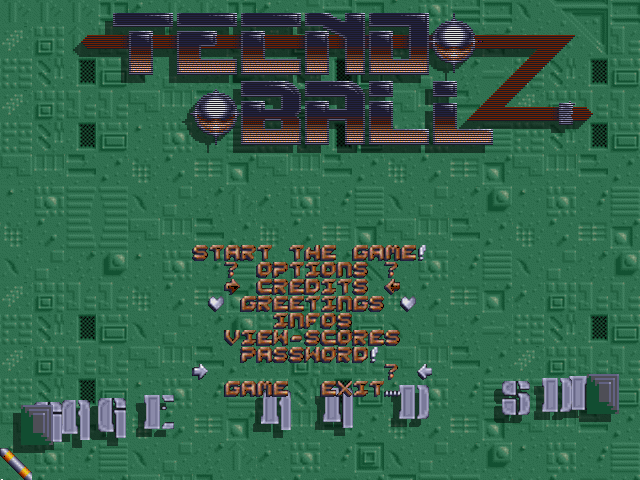 Welcome to a new game review here on the Gaming on AmigaOS 4.1 blog! 🙂

Yesterday we had a look at a shoot’em up game called Powermanga, which was a blast. 🙂 Today we are going to explore a game of a different genre, namely the one known as bat and ball. In these kinds of games, you usually control a bat at the bottom of the screen and your aim is to bounce the ball onto bricks to make them disappear. A good example is the game Arkanoid, which was very popular back in the days.

The game we’re going to review today is called TecnoballZ and was created by TLK Games. It was ported to AmigaOS 4 by ToAks, Frak and AlexC back in 2005. I had never heard about this game before, so was unsure on what to expect.

TecnoballZ works on all AmigaOS 4 configurations, including WinUAE. At OS4Depot it is written that you can even run it on AmigaOS Pre-release Update 3!

After the download has completed, head over to the directory where the file is located, right click on the icon and select “extract to”. Then choose the destination drawer and unpack. Afterwards you can navigate to where you unarchived it and double-click on “technoballz.exe” to launch the game. It will start right away.

As mentioned earlier in this review, TecnoballZ is a bat and ball game. You are in control of a bat located at the bottom of the screen. Your goal is to bounce the ball so that it removes all the bricks that are stacked at the top of the screen. It is not as easy as it sounds, as the ball bounces of walls and ends up in all kinds of places. There are also enemies flying around blocking the way for the ball and causing disturbance.

Let’s have a look at how the game played when I took it for a spin. 🙂

I’ve also recorded a video of the gameplay, which can be viewed underneath:

So, what are my thoughts after having played TecnoballZ on AmigaOS 4.1?

Honestly, I enjoyed it a lot. It is a very good bat and ball game in my opinion. First of all, it sports some deliciously nice graphics with a strong Amiga 500 feel to them. Secondly, it has good sound effects and music. Especially enjoyed the music, since it reminded me of good, old modules on the Amiga. It also features many kinds of bonuses, an in-game shop and challenging levels. Put all of this together and we have a fun, cool and nice looking bat and ball game. If you like these kinds of games or wants to play something relaxing, I recommend giving TecnoballZ a try. Two thumbs up for this game from me! 🙂