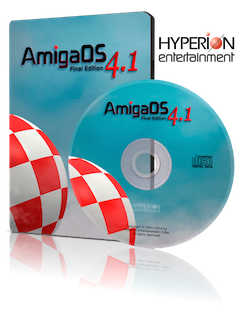 Hyperion Entertainment is proud to announce the immediate release of update 2 for AmigaOS 4.1 Final Edition. Update 2 is by far the largest update ever released for AmigaOS and includes more than 200 updated components with hundreds of bug fixes, improvements and new features and six completely new OS components. The update is the combined effort of four years of AmigaOS development and will bring AmigaOS4.1 Final Edition to a completely new level of stability and usability.

The complete list of updated, improved and new components can be found in the changelog that also contains a list of the major bugs and issues that has been resolved. Some of the highlights of update 2 are.

Update 2 is free to registered users of AmigaOS 4.1 Final Edition and can be found in the download area at https://www.hyperion-entertainment.com/.

This update is the result of the continuing effort of a dedicated group of AmigaOS 4.1 Final Edition developers and beta-testers. Thank you!

We strongly recommend that you install update 2 on top of a fresh install of AmigaOS 4.1 Final Edition update 1. If you decide to update your existing installation you should back it up beforehand!

The user, Kas1e, has made a video of the update on YouTube, which you can check here: